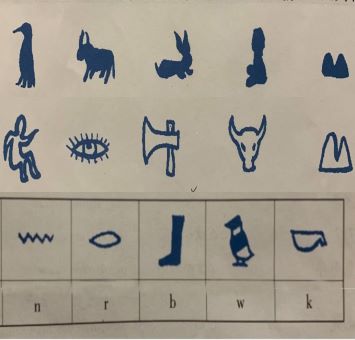 Those who learn the Chinese language always ask one question: why do Chinese people still use characters?

To answer this question we need to look back into history. Before alphabets were adopted, we used pictographs: small pictures that represented objects and concepts. People learnt how to speak a long time ago, but writing was not invented until about 8000 years ago. As oral skills were developing further, people needed a way to write down their words. Thus, drawing pictures appeared to be the simplest way to do so. People drew things that they saw around them: mountains, water, animals, other people, etc.
You can see some examples of Ancient Egyptian and Cretan pictographs on the image to the left.

Drawing pictures takes time and certain abilities so pictures were simplified into symbols or pictograms.
Pictograms appeared 6000 years ago, and phonetic writing was invented much later. To create a phonetic alphabet people needed to separate and distinguish sounds, and it was more complicated than drawing pictures.

So why did people need phonetic alphabets?

In ancient languages, words had too many grammatical forms, and characters couldn’t convey all grammatical changes. For example in modern English we use different forms: “eat, eats, eating, ate, eaten”. So at first, people used pictographs to represent consonants.

In ancient Egyptian language water represented sound [n]. Why? Because the word “water” began with [n]. The same principle was used with other sounds. Later they created symbols for vowels. Over time pictographs were simplified and turned into letters.

The main reason is that Chinese words have no grammatical changes. For example the verb “to eat” — 吃. Whether the subject is I, you, he, she, it, we, they, or whether there is a different tense — past, present or future — used, the verb 吃 is still used in its basic (dictionary) form.

The time and mode of the action are created by additional particles, prefixes, or extra words: 吃着，正在吃，吃过，吃完，吃了.

So for the ancient Chinese people, the characters were the easiest, most functional way of writing and this continues to the present day.

In a post-Brexit world, British business will need to look for new trading opportunities, and…

Can you believe that Korean is related to Turkish?   Well, it’s true — Korean…

Any cookies that may not be particularly necessary for the website to function and is used specifically to collect user personal data via analytics, ads, other embedded contents are termed as non-necessary cookies. It is mandatory to procure user consent prior to running these cookies on your website.